5 Days Safari in Selous and Mikumi national park is the best southern Tanzania safari assures you to enjoy the African nature and the wildlife while participate in various game viewing activities. Starting and ending in Dar es Salaam the Selous and Mikumi Safari takes you the African largest and untouched ecosystem which is home to hundreds varied species of animals and birds. This vast ecosystem is shared between the two parks which allow animals to migrate freely between the Selous and Mikumi in different season of the year searching for fresh pasture and water.

Game viewing experience in Selous game reserve and Mikumi national park is quite special and cannot compare with the northern Tanzania parks where there is a high congestion of tourist. This tour is truly gives you the chance to experience this secluded African wilderness while surrounded with few other tourist vehicles or sometimes alone.  Truly the Selous and Mikumi safari takes you away from the crowded safari.  In addition to that this Safari offers a range of game viewing activities such as boat safari, game drives and walking safaris in the middle of the jungle. Both three options aim at bringing you closer to the nature and experience the uniqueness of the African wilderness.

Apart from starting this safari from Dar es Salaam it can also started from Zanzibar by flying to Dar es Salaam airport where you will depart by road to Selous game reserve and Mikumi national park. For visitors with limited time the tour can be customized to three days where they will only visit Selous game reserve by flying directly from Zanzibar to Selous and back after the tour. By doing this option the cost of the tour will slightly differ from the original cost of the 5 days Selous and Mikumi Safari.

In this safari you  will stay in mid-range camps or lodges however this can be customized to budget accommodation if requested.

Today is the first day of your 5 days Selous and Mikumi Safari where you be picked up from your hotel in Dar es Salaam at 08:00 am for the journey to Selous game reserve. If you will be arriving on the same day from Zanzibar our driver guide will meet you at the airport at the time of your arrival and continue with the journey to Selous game reserve. Arrive Selous in the mid-day for lunch and in the afternoon embark into the boat safari along the Might Rufiji River. The boat safari is among the major game viewing activity in this 5 days Selous and Mikumi Safari which offers you the rare chance to get closer to the riverine animals and water birds.  You can get closer to animals such crocodiles, hippos, waterbucks and varied bird species. However animals such buffaloes and elephants which feed along the river banks or those which come to drink can also spot at a very short distance un- compared to the normal game drive. In the evening get back to the camp for dinner and overnight.

In the two days of your 5 days Selous and Mikumi Safari you will conduct game drives in various parts of the vast Selous game reserve. The Selous Game Reserve is known to be the most remote wildlife area in Tanzania and in the entire continent of Africa. With the total area of about 54,000 km square bigger than Switzerland, Holland and Belgium independently this massive wilderness area is the home to the largest population of elephants on the planet.  In addition to that it is also the leading place with the highest population of the rare African hunting dogs.  Other animals of the Selous game reserve include lions, giraffes, leopards, impala, wildebeest, hartebeests, pythons and elands.  Selous Game Reserve has over 350 varied species of birds. To explore much of the nature you will also be taken for a 2 to 3 hours guided walking safari within the reserve.  The guide will help you spot different birds and identify different species of plants and trees. Along the walking trail you will also spot several animals but your armed ranger will take care of it. In the evening you will return to the camp / Lodge for dinner and overnight.

After breakfast at the lodge/camp continue with your 5 days Selous and Mikumi Safari driving toward north of the reserve to Mikumi National Park with picnic lunch. On your arrival to Mikumi continue with the game drive till evening. Mikumi national park offers an amazing game viewing experience which starts just few minutes from the park entrance gate.  Although mikumi is rich in varied species of animals and birds but it receives less visitors annually compared to its counterpart northern Tanzania game parks. While on game drive you can see animals such as lions, leopards, hyenas, wild dogs, elephants, zebras and varied species of antelopes.  Mikumi has recorded to have over 400 species of birds. The common birds of Mikumi include Marabou stork, Red-billed oxpeckers, Black-bellied bustard, Francolin, Cattle egret, Guinea-fowls, Hornbill and Malachite Kingfischer. There are also colorful birds such as Yellow-throated long claw, the Lilac-breasted roller and the Bateleur eagle. Continue with game drive till late afternoon when you will drive to Mikumi Wildlife Camp for dinner and overnight.

Today you will depart for the sunrise game drive in Mikumi national park. Early morning is the best time to spot predators as they are still very active before the sun temperature higher. After few hours of the game drives return to the camp for leisure breakfast which followed by a departure to Dar es Salaam. At Dar es Salaam you will be dropped at the airport or your hotel.

End of the 5 days Selous and Mikumi Safari

The Price does not include 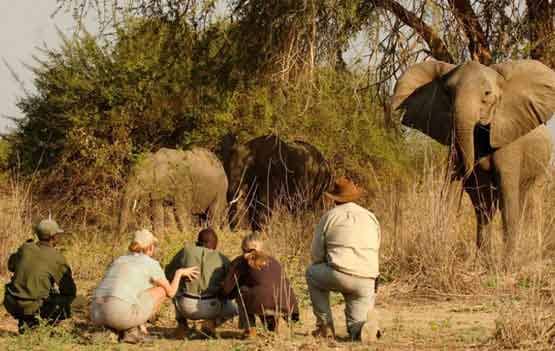