Gombe day trip departs from Kigoma town each day at 06:00 am by boat which takes about one hour and half to Gombe Stream National Park. This chimpanzee day tour which is sometimes known as weekend break is ideal for travelers with limited time who want to experience the chimpanzee trekking.

Gombe Stream National Park is one of the Tanzania smallest pristine parks located in the Eastern Shore of Lake Tanganyika. This park is like a strip of land with an area of 35 km2 covered by green tropical rain forest lies on Great Rift Valley Escarpment which offers a safe home to wild chimpanzees.

The main highlight of Gombe day trip is chimpanzee trekking but apart from that there are other species of primates which you will see. Among the primates are baboons, red colobus monkeys, vervet monkeys, bush babies and blue monkeys. Gombe National Park boast also over 200 species of bird so it is good site for bird watching.

At 06:00 am we pick you from the hotel in Kigoma for your Gombe day trip. Transfer to Kibirizi port where you will take boat to Gombe stream National Park the journey of about one hour and half. As we arrive at Gombe you will register at the park headquarters and assign a guide to who will take into the forest for chimpanzee trekking.

Walking in the forest searching for the chimpanzee is very fascinating. From a distance you will hear the sounds made by chimpanzees communicating to each other. Our Gombe day trip guide will help us tracking the chimpanzee to their hiding and feeding areas.  As we continue with the tracking of chimps we shall walk up to hill to Kakombe waterfalls. At this point we shall enjoy the stunning view of the park and Lake Tanganyika which border with the park. We will also take our picnic lunch while also continuing to enjoy this amazing view and scenery of Gombe Stream National Park.

After lunch break we shall continue our with the trek down the hill searching for different families of chimpanzees and other primates. Our guides will also help us to spots different bird and explain to us about different types fruits eaten by chimps.

In the afternoon at 16:00 hour we shall depart Gombe by boat to Kigoma town and then transfer to the hotel in Kigoma town

End of the Gombe Day Trip

Saadani day safari trip gives you the chance to visit the only park in the entire East Africa region which border with the beach. This day trip starts and ends up in Dar es Salaam and it is suitable for travelers, school children or college students who want to explore the Tanzanian wilderness but with insufficient time.

The major game viewing activities on the Saadani day Safari trip are the game drive and boat trip along the Wami River which crossing Saadani National Park flowing towards the Indian Ocean. This river host a large population of hippos, crocodiles, flamingos, and many other large bird species. Both game drive and boat safari will provides you with the highest chance to see a variety of large African mammals such as elephants, giraffe, buffalo, warthog, reedbuck, waterbuck, hartebeest, greater kudu, wildebeest, eland, sable, yellow baboon. The Saadani National Park is also boast a large population of birds and reptiles.

in the mid-day your guide will show the picnic site where you will stop for some few minutes to take your picnic lunch. After the lunch you will continue with further game viewing activities in the park until later afternoon hours when you will start driving back to Dar es Salaam.

Early in the morning at 06h00 we shall pick you up from the agreed picking point in Dar es Salaam to start the Saadani Day Safari Trip. The journey from Dar es Salaam to Saadani takes about 2 hours driving through the historical town of Bagamoyo. While on the way we shall pass through local villages, small town and some historical sites. The landscapes along the way are so beautiful featured by valleys, hills and the coastal plains.

As we arrive at Saadani national park you we shall proceed with the game drive into the park searching for a different herds of animals. With no doubt we will be able to spot various land mammals such as elephant, lion, giraffe, buffalo, zebra, waterbuck and sable antelope and birds like the African hornbill.

During this Saadani Day Safari Trip we will be able to spot crocodiles, hippos and marine and riverine birds such as mangrove kingfisher and lesser flamingo along the Wami River. The beaches of Saadani national parks are one of the major breeding sites for green turtles on Main Land Tanzania.

Picnic lunch will be served on the beach and proceed with the game viewing till later afternoon then depart back to Dar es Salaam. 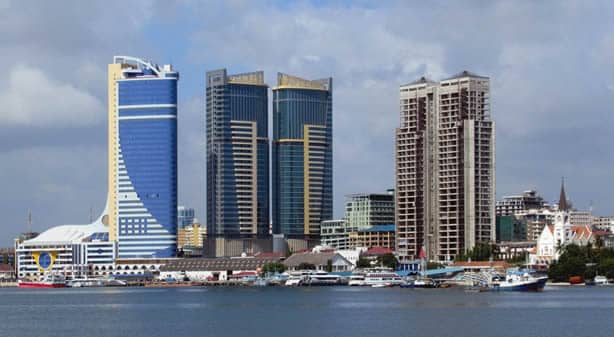 Dar es Salaam city tour show you through the largest and the commercial city of Tanzania which is full of dynamic, colorful and diverse culture. This tour can be done a day before or after mikumi safari, Selous safari or safari holidays to any other parks in southern Tanzania area. Originally Dar es Salaam city was known as a small fishing village called Mzizima which later grow into bustling city and hub for East African business and trade. During the tour you will explore the interesting culture, history, food and the people among others.

After picking you up from your hotel or the resident house in Dar es Salaam the tour will start by visiting Kivukoni Fish Market which is located near the harbor. The market is full of varieties of fish of different shapes and sizes. Every day the fish market is flooded by retail, wholesale, city dwellers, restaurateurs and people from different corner of the city coming to buy fishes of their preferences.

The Dar es Salaam City tour proceed to the stunning Botanical Gardens which were established several hundred years ago by Germans. Opposite the garden is Karimjee Hall and you’ll be able to see the fantastic architecture while your guide explains the history behind the building.

As you proceed with the Dar es Salaam City tour the next destination is the National Museum. The National Museum features many historical treasures with a wide variety of exhibits including archaeological findings, rock paintings, ancient foot prints, the remains of the first humans and more.

The Mwenge Carvers Market is made up of small shops with stands displaying carvings of different kinds, traditional dresses, the Tinga Tinga paints and more. You’ll be able to browse the stalls, chat with the carvers and buy souvenirs if you wish.

Visit the Makumbusho Village museum which shows into details the Tanzania Cultural heritages. In this museum you will get a brief summary of the whole Tanzanian culture and tradition through seeing their housing, shelters among others..

Kariakoo is the busiest and most exciting market in Dar es Salaam so you’ll be able to enjoy an authentic Tanzanian shopping experience here.

Mnazi Mmoja is another exciting, vibrant place to visit with strong historical significance. You’ll be able to see the Uhuru Torch which was placed here in 1961 to celebrate Tanzania’s independence from Germany.

You’ll visit Samora Avenue to see and learn about the historical Askari Monument. Then you’ll visit the beautiful old Azania Front Lutheran Church and take in the views of Dar Es Salaam harbor view from the roof.

In the late afternoon when the tour is over we’ll drive you back to your hotel. It’s been a busy day and you’ll have seen and learnt a lot about Dar Es Salaam.

$165 Per Person (Including transport, entrance fees and city guide)

Please note all day trips are for a minimum of two people.