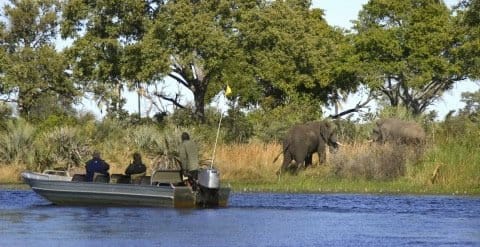 Saadani Boat Safari; Boating safari in Saadani national park is a real adventure. Riding a boat on wami river watching hippos and crocodiles at close vicinity will bring you a sense of real African safari. This boat safari offers guest privilege to enjoy safari and beach holidays at the same time.

Saadani National Park is the only game reserve in East Africa bordering the sea with beautiful white sands beaches. Located about 100 km North West of Dar es Salaam Saadani national park is the nearest park to Dar es Salaam and it is ideal for week end break and day safari trips.

The beaches at Saadani national park offer the best breeding site for green turtle (the largest of all hard shelled sea turtles) in the north of Dar es Salaam. These turtle lay their eggs in these beaches and let the sun temperature to hatch them.

The Saadani National Park host about 30 species of larger mammal as well as several reptiles and birds. Basically the Saadani vegetation can be divided into major three categories the tall grass savanna with which grow up to two meters length, scattered palms and the grass land which dominated with short grass.

A boat safari in the Wami River is a true highlight for any visitor to Saadani National Park. The boat safari is normally last for a duration of 2 hours up to 3 hours which offers the best chance to see several pods of hippos and huge crocodiles as well as riverine birds such as malachite, pied and even giant kingfishers. Other common birds include the woolly necked stork, common sand pipers, lilac-breasted rollers, palm nut vultures, fish eagles and ground hornbills.

Leave Dar es Salaam for the camping safari in Saadani national park at 0800 hrs via Chalinze. Arrive Saadani in the mid-day for lunch at the camp and short rest. Afternoon embark into boat safari along Wami River where you will see Hippos, crocodiles, waterbucks and different water birds. Late afternoon drive back to the camp for Dinner and overnight.

Today you will go for a short walking safari just after the breakfast accompanied by an armed ranger. During the walking your guide will assist you to identify different plants and spotting different species of birds. Back to the Lodge for lunch and after lunch depart to Dar es Salaam where we will drop at the hotel or airport for your onward flight back home. End of safari services

Game drive in a 4×4 Safari vehicle with pop roof

Fee for a professional a qualified Safari guide

Full board accommodation whilst on Safari

Activities as per itinerary

Other activities which do not included on the itinerary

Items of a personal nature