The Land of Unique Wildebeest Migration

Serengeti is approximately 27,000 square kilometers. It covers 14,763 km2 (5,700 square miles) of grass land plains and savannah woodlands. The park lies in the north of the country, bordered to the north by the national Tanzania and Kenya border, where it is continuous with the Maasai Mara game Reserve. To the south East of the park is Ngorongoro Conservation Area, to the south west is lies Maswa game reserve and to the western borders are Ikongoro and Gurument game reserves. Finally to the north East lies Loliondo game reserve.

The Serengeti National Park is absolutely huge. If you are intent on viewing the great Migration, then where you stay is as much dependant on the time of the year you are travelling as it is the style of camp or hotel you are looking for. Get the location wrong and this park is so big that you will not see the herds.

The Serengeti is, therefore, broadly divided into four distinct areas; the central Seronera valley, the western corridor, the northern Lobo and Kogatende areas and finally the southern plains

In the heart of the national park, Seronera is a network of river valleys that ensure year-round water supplies and keep the region incredibly rich in wildlife throughout the year. Seronera has all the best features of the Serengeti and also, sadly, its worst. Scenically, it is a lovely area with open plains, occasional kopes and lines of hills to add interest. The resident game here is phenomenal, with high densities of relaxed leopards, cheetahs and lions. These live off the herbivores, as well as the migrating game. The migration passes through here in April / May, but Seronera is within reach of both southern plains and the western corridor – so from about November to June, it can be used as a base to see the migration. 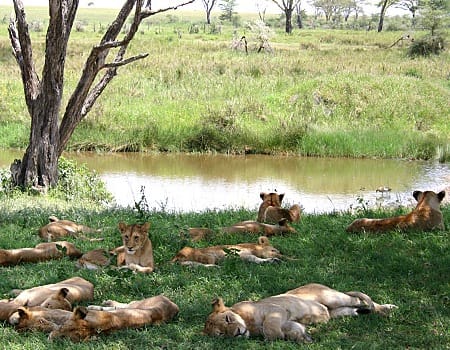 Stretching to the west, almost to Lake Victoria, the Serengeti narrows into what known as the Western Corridor.  The key features of this area is the two rivers, the Grumeti and Mbalageti, which run almost parallel, each supporting a band of most, evergreen riparian forest. This area sustains a very good permanent game population, including plenty of zebras and wildebeests, all the predators and forest ‘Specialists’ like colobus monkeys. The bird life is particularly varied. The migration passes through between about May and July – pausing to gather momentum before crossing the crocodile rich waters of the Grumeti River, into the Grumeti reserve. 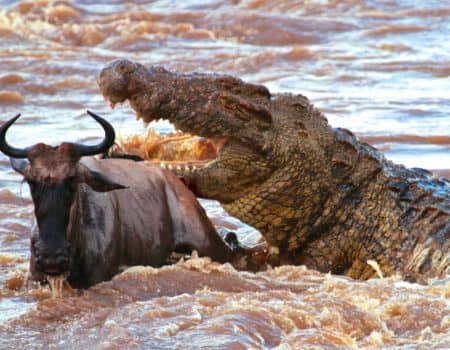 The landscape is dominated by open woodlands (predominantly Commiphora) and hills, ranging from Seronera in the South, to the Mara River in the limit with Kenya. A part from the migratory wildebeest and zebra (which occur from July to August and in November), the bush savannah is the best place to find elephants, giraffes and dik diks.

The endless, almost treeless grassland of the south is the most emblematic scenery of the park. This is where the wildebeest breed as they remain in the plains from December to May. Other hoofed animals – zebras, gazelles, impalas, hartebeests, topis, buffalos and waterbucks – also occur in huge numbers during the wet season. Kopjes are granite florations which are very common in the region, and they are great observation posts for predators, as well as a refuge for hyrax and pythons.

Today, the Serengeti National Park, the Ngorongoro Conservation Area and the Maasai Mara Game Reserve across the border in Kenya, protect the greatest and most varied collection of terrestrial wildlife on earth, and one of the last great migratory systems still intact. The Serengeti is the jewel in the crown of Tanzania’s protected areas, which altogether make up some 14% of the country land area, a conservation record that few other countries can match.

The History of Serengeti National Park

For centuries, the vast wilderness of the Serengeti plains remained virtually uninhabited but about hundred years ago the nomadic Maasai came down from the north with their cattle. The first European to set foot in the area was the German explorer and naturalist Dr. Oscar Baumann, who passed by as an agent of the German anti-Slavery Committee on his way to Burundi. He was followed by his compatriots who built Fort Ikoma in the north which was used as an administrative center until it fell to the British in 1917.

The first professional hunter came in 1913. They found the wildlife plentiful especially the lions, but saw no elephants. Seven years later an American arrived in a strange new contraption known as a Ford motor-car and news of the wonders of the Serengeti had reached the outside world. Because the hunting of lions made them so scarce (they were considered ‘vermin”), it was decided to make a partial Game Reserve in the area in 1921 and a full one in 1929. With the growing awareness of the need for conservation, it was expanded and upgraded to a National Park in 1951. Eight years later the Ngorongoro Conservation was established in the south – east as a separate unit.

In the open grassland during the rainy months from November to May hundreds of thousands of wildebeest and Burchell’s zebra congregate. The area is the starting point for one of the great wonders of the world; Serengeti annual migration. Toward the end of May when the grass becomes dry and exhausted, the wildebeest start to mass in the huge armies. All is far from peaceful, for it is the rutting season and each male tries to establish a stamping ground. Eventually after several dummy runs, the animals begin their trek in a column several miles long to the permanent waters in the north of the park. After moving westwards the migration divides by some uncanny instinct, one group turning north-east and the other due to north. Once started little stops the stampede; hundreds often drown at a time in the broad Mara River in the north. This mass movement has a following of carnivores always ready to dispose of the weaklings.

The river crossing happen in Serengeti at any time during this time of the year but are elusive rapid and unforgettable experiences. The wildebeest are easily spooked by real or imagined threats. Patient waiting near a herd by the river may only produce a puff of dust as they turn on their heels and run away. Or maybe the herd is just not ready to cross the river and they are milling around contentedly. But if everything is right then, there is utter and extraordinary chaos as the herds struggle to get to the other side of a major river filled with crocodiles.

A unique combination of diverse habitats enables it to support more than 30 species of large herbivores and nearly 500 species of birds. Its landscapes, originally formed by volcanic activity, have been sculptured by the centered action of wind, rain and sun. It now varied from open grass plains in the south, savannah with scattered acacia trees in the north, to extensive woodland and black clay plains to the west. Small rivers, lakes and swamps are scattered throughout. In the south – east rise the great volcanic massifs and craters of the Ngorongoro Highlands. Each area has its own particular atmosphere and wildlife. 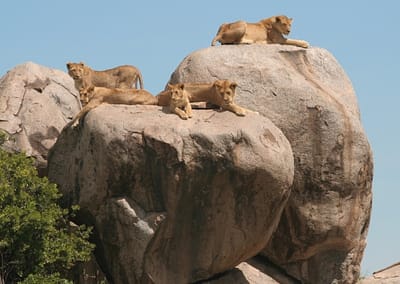 Tanzania’s oldest and most popular national park, also a world heritage site and recently proclaimed a 7th worldwide wonder. This land is justifiably famous for its huge concentrations of wildlife, especially when some six million hooves pound the open plains, as more than 200,000 zebras and 300,000 Thomson’s gazelles join the wildebeests trek for fresh grazing. Yet even when the migration is quite, the Serengeti offers arguably the most scintillating game-viewing in Africa: great herds of buffalos, smaller groups of elephants and giraffes, and thousands upon thousands of elands, topis, hartebeest, impalas, and grant gazelles. The spectacle of predators versus prey dominates Tanzania’s greatest park. Golden maned lion pride feast on the abundance of plain grazers. Solitary leopards haunt the acacia trees lining the Seronera River, while a high density of cheetahs prowls the south-eastern plains. Almost uniquely all three African Jackal species occur here, alongside the spotted hyena and a host of more elusive predators, ranging from the insectivorous aardwolf to the beautiful serval cat. Serengeti National Park also supports many further species, including cheetahs; Thomson’s and grant gazelles, topis, elands, waterbucks, hyenas, baboons, impalas, African wild dogs and giraffes. The park is also boasts about 500 bird species, including ostriches, secretary birds, Kori bastards, crowned cranes and marabou storks.

Getting to Serengeti National Park

By plane: Scheduled and private charter flights are available from Arusha, Lake Manyara and Mwanza.

By Road: You can drive from Arusha, Lake Manyara, Tarangire or Ngorongoro Crater

The Serengeti is one of the very few places in Africa of which you can say the game viewing is outstanding at any time of the year. April and May sees the heaviest rains but even then, the lodges are ridiculously good value and the park is quiet. We believe the very best time of year to be in the park is either from January to March which include the spectacle of the Great Migration calving or alternatively from the middle of July all the way to the middle of November when the herds are crossing the Mara River to or from Kenya. 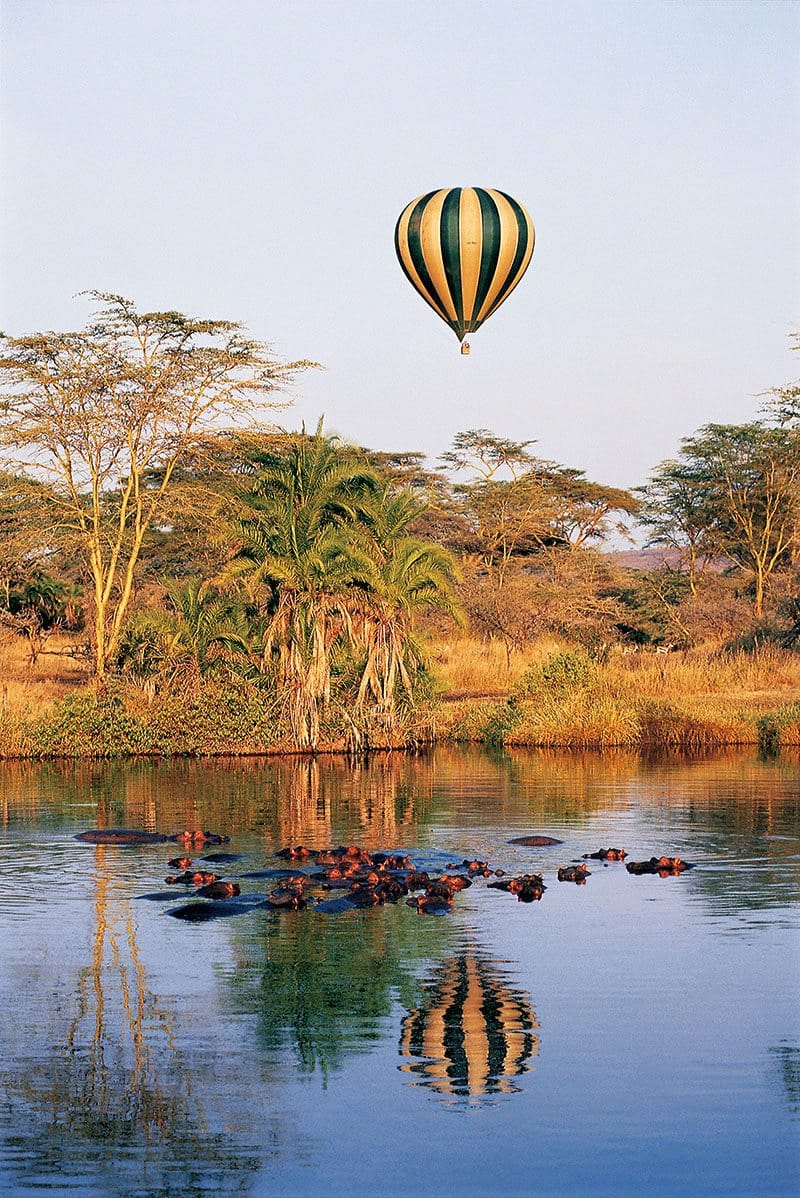