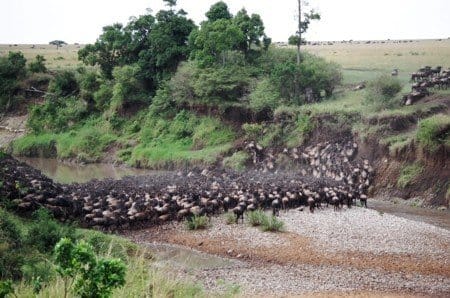 Serengeti vacation is an adventure of a lifetime, designed to maximize your safari experience in the African bush. In this tour you will enjoy spectacular game viewing in 4 northern Tanzania national parks Tarangire, Serengeti, Ngorongoro crater and Lake Manyara. After an extreme game viewing in the day you will spend a night in the comfortable, spacious lodges, camps and enjoying exquisite cuisine and first class service.

All these will be offered to you by a team of friendly lodge and camp staff led by a professional guide. Furthermore you will enjoy game drive while in a comfortable and extended 4WD Safari land cruiser equipped with window seats and open roof space which assure you of 360 degree view.  The Serengeti safari can also be extended by a beach holiday to the spice island of Zanzibar.

Arrive at Kilimanjaro International Airport where our representative will meet and greet you then transfer to Arusha City. Located at the base of the Tanzania second tallest mountain “Mount Meru” Arusha is the largest city near to the Tanzania northern national parks the Serengeti National Park, Ngorongoro Conservation Area, Lake Manyara National Park, Olduvai Gorge, Tarangire National Park, Mount Kilimanjaro, and Arusha National Park. Right at your lodge your guide will give you a brief about your next day wildlife Safari. Overnight at Zawadi House

Start your Serengeti vacation by heading to Tarangire National Park with your professional driver guide. The Tarangire National Park is the third largest national park in Tanzania and home to large population of elephant. Giant baobab trees are an interesting feature of the park, dwarfing the animals that feed beneath them. Animals congregate along the Tarangire River, which provides the only permanent source of water in the area. This park has a huge a diversity of wildlife including lion, leopard, cheetah, and up to six thousand elephant. Diner and overnight at Sangaiwe Tented Camp or other property of the same standards.

Breakfast; proceed with the serengeti vacation to Lake Manyara National Park. The Lake Manyara is stretches from the base of the dramatic Rift Valley escarpment to the soda lake which is one of the most beautiful places in Africa. At the park main entrance gate you will experience a green vegetation consist of the ground water forest, which provide refuge to troops of baboons and blue monkeys. Further to the south the forest disappear to woodland, grassland, swamps and beyond, the soda lake itself where over 350 species of birds, including the lively flamingo, pelican, sacred ibis, grebe and stork can be viewed (a bird watchers’ paradise). Further southern there several hot springs famously called Maji Moto. These hot springs reveal the ongoing active geological processes which take place beneath the ground. Lake Manyara national park is renowned for its abundant buffalo, elephant, giraffe, impala, hippos, as well as a great variety of smaller animals. In addition to that, this park is the best place to spot the elusive tree climbing lions. Late afternoon you will be driven to Karatu Village. Diner and overnight at Bougainvillea Lodge.

Today you just after breakfast you shall continue with the tour to Serengeti National Park. Driving through Ngorongoro Highlands and stopping off to visit the Olduvai Museum. Arrive at Seronera Area for picnic lunch. Afternoon game drive in central Serengeti National Park, probably the greatest park on earth. This park, undoubtedly the most famous in the world, covers over 14 000 sq. km and offers amongest many other things the biggest concentration of big cats in the world (Cheetahs, Lions, Leopards, Wild cats…). Many different landscapes can be found in the Serengeti: Savannah with the big plains to the south, hills & woods to the west, the kopjes area to the east, and bush land to the north. Important rivers (Seronera, Banagi, Grumeti ) also run through the park. Many different species of mammals can be spotted during game drives, elephant, buffalo, giraffes, antelopes… hippo and crocodile can also be found. Diner and overnight Serengeti Tortilis Camp or similar.

Very early Morning and evening game drives through the Serengeti plains. Serengeti is perhaps the most impressive wildlife sanctuary in the world. These vast, seemingly unending plains are inhabited during the migration by enormous herds of wildebeest and zebra. There is a great diversity of wildlife including lion, leopard, cheetah, impala, buffalo, birds and up to ten thousand elephant. Diner and overnight at Serengeti Tortilis Tented Camp.

Morning departure to Ngorongoro Crater. Descend into the 100-square-mile Ngorongoro Crater to view game on the vast grasslands of the crater floor. The bottom of the crater dotted with watering-holes, shelters almost 30 000 animals in an area naturally enclosed by the slopes of the volcano. You will find the Big Five lion, elephant, buffalo, rhino, leopard among others. Ngorongoro crater is the largest unbroken caldera in the world and surrounded by very steep walls rising 610 meter from the floor, it is considered to be one of the Wonders of the Natural World and is a veritable haven for wildlife. Spectacular animal life can be found throughout the year due to the permanent availability of grass and water. Picnic lunch, overnight at Country Lodge Karatu.

Day 7: To Kilimanjaro Internal Airport or to Zanzibar Island

After breakfast at the lodge, drive to Mto wa Mbu for cultural visit to the local women and learn how they do their daily activities including farming, small women financing groups, you will have local lunch with the local women to taste the local African food. After lunch transfer to Kilimanjaro International Airport for your flight back home.

This tour can be extended to “The Spice Island of Zanzibar”.

Enquire for the Serengeti Vacation price