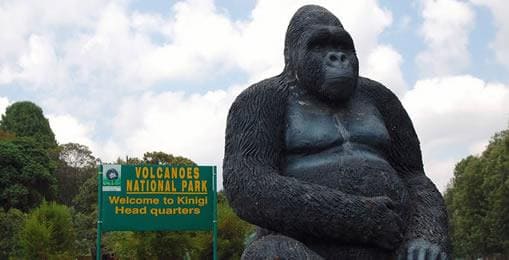 Volcanoes National Park in Rwanda lies along the Virunga Mountains, with 8 ancient volcanoes, which are shared by Rwanda, Uganda and the Democratic Republic of Congo. Situated about two hour drive from Kigali the Capital of Rwanda, the park is a central location for exploring some distinctly Rwandan experiences. The Volcanoes National Park landscapes features stunning landscapes which offer thrilling hiking and habitats to the mountain gorillas.

Near the Volcanoes National Park is the bustling and vibrant markets of Musanze and the caves which can be comprised in the tour.

Volcanoes National Park habituated by ten groups/families of the mountain gorillas. The Gorillas tends to migrate from low altitudes areas to the top of the mountains searching for food. Normally during the dry season gorillas climb higher up the mountains and descend in the wet season. The local and experienced guides knows specifically the movements of each family of the gorillas in every season. These guys will help you locate the creatures and make your dream come true.