Camping Safari in Serengeti and Ngorongoro crater which are by far the most famous parks in Africa and the world offers a rewarding safari experience. These two parks are the UNESCO heritage site and have the highest number of wildlife than any other parks in the country. Although the highlight of this camping safari is the great migration but visitors have a great chance to see other animals include the legendary BIG FIVE.  The herds of the wildebeest migration spend about ten months roam within the shared Serengeti and Ngorongoro ecosystem. However the migration herds spend about two to three months in Ngorongoro ndutu area and the remaining seven months in different regions of Serengeti National Park. Travelers for camping safaris in Serengeti and Ngorongoro can witness the great migration any time from November to August of following year as long as you plan your safari to visit the right area of the parks where the herds of migration are present at that particular time.

Serengeti national park vast area covers about 15,000 km2 and it is the most famous

destination in Africa and the whole world. During Serengeti camping safari you are going to see plenty of animals as this park host more than 30 species of large mammals and about 500 species of birds. Vegetation covers of Serengeti varies from open grass plains in the south , Savannah with scattered acacia trees in the centre, hilly wooded grassland in the north, to extensive woodland and black clay plains to the west. Small rivers, lakes and swamps are scattered throughout.

Ngorongoro Conservation area formed in the south-east of the Serengeti National Park. The Ngorongoro conservation features the spectacular future of the world largest caldera “The Ngorongoro Crater”. The crater was formed due to a massive volcano eruption which occurred around 3 million years ago. After first eruption the second pyroclastic eruption took place which collapse the entire caldera by throwing all the pyroclastic materials several kilometers away to the southern area of Serengeti which result to a open plains.

While on camping safari in Ngorongoro crater you are going to see the densest population of large game include the endangered species of black rhino. There are also a significant number of big cats and hyenas as well as other herbivores. Different from other parks in Tanzania the ngorongoro crater is the best spot where one can spot “The BIG FIVE” within a single day.

Our driver guide will pick you from your hotel in Arusha at 07:30 am for the journey to Serengeti National Park. In this journey you will travel on a paved road for about 175 km to Ngorongoro entrance and the remaining 160 km from the along malanja depression to Naabi gate Serengeti. After 5 hours of driving on an adventurous road you will then arrive to the Great Serengeti National Park where you will stop for picnic lunch which followed by an with an afternoon game drive.

The Serengeti National Park covers an area of about 14,763 sq km or 5,700 sq miles where the northern section of the park (Lobo area) is hilly with woodlands vegetation. The western area comprises of broken savannah areas dotted with acacia trees and whistling thorns acacia. The area is also boasts the riverine forest supported by the Grumeti River and its tributaries. The southern third of the national park comprises of endless plains which attracts the herds of migrations. The migration herd moves south to the plains in December to March of each year following the rains.

Early breakfast, continues with both morning and afternoon game drives in Seronera area the central portion of Serengeti national Park. The Seronera is an enjoyable place to be as it offers a variety of different habitats due to the presence of permanent water sources and fodders all year round.  A significant number of predators such as lions, cheetah, leopards and hyenas can also be spotted in this area. Your driver guide will help you to locate them and the herds of migration using his skills, knowledge and experiences.

If you plan to visit between March and May you will have good chance to see migration herds in Seronera area, however from December to April the migration will be in Ndutu the Southern area of Serengeti calving.

You will have all meals and Overnight at Serengeti Seronera Camp Site.

Wake up early morning for sunrise game drives in Serengeti at 0900 hours back to the Campsite for breakfast. After taking breakfast, departs for the game drive with picnic lunch en route to Ngorongoro crater rim via Olduvai Gorge. The Olduvai Gorge is a word famous archeological site holds the earliest evidence of the existence of human ancestors. Hundreds of fossilized bones and stone tools were found in the area dating back millions of years. After touring the area continue with the journey to the crater rim in Ngorongoro Conservation Area.

The Ngorongoro Conservation Area is the multiple land use area located between the Serengeti and Lake Manyara. It is also a home to the famous Ngorongoro Crater which is the largest unbroken caldera in the world with an area of 260 km and a depth of 610 meters.

The crater is one of the few places in Tanzania and Africa where offers a high chance to see the Big Five (lion, leopard, buffalo, rhino and elephant) in the course of a game- drive. Other animals which can be seen in the crater include wildebeest, hyena, jackals, zebra, and varied species of antelopes.

The crater is said to have about 65 – 75 lions and 450 hyenas which makes it the densest population per square kilometer. Due to this fact it is quite obvious to observe the interspecies competition between hyena and lions in the area. The Lerai forest is one of the best places where you can spot leopard in the crater.

Another interesting fact about the Ngorongoro conservation area and the crater is the presence of the Maasai people who share habitats with animals. During game drive in the crater you can also see the maasai cattle and buffalo grazing together with lion present few meters away.

Dinner and Overnight at Ngorongoro Simba “A” Campsite.

Wake up early morning for breakfast then at 0700hours descend into the Crater floor for half day game drives.

Today you are going to see the Big five (Rhino Lion, Leopard, Buffalo and Elephant) live in the crater. You driver will help you to spot other animals such as Zebra, Hippo, Wildebeest, Hyena and more.  The Lake Magadi which is situated within the crater boasts a varied species of water birds such as flamingos, geese and stocks. After several hours of game drives you will break for picnic lunch in one of the picnic lunch within the crater floor. After lunch proceed with game drives while ascending the Crater rim for the journey back to Arusha.

End of the Serengeti and Ngorongoro Camping Safari 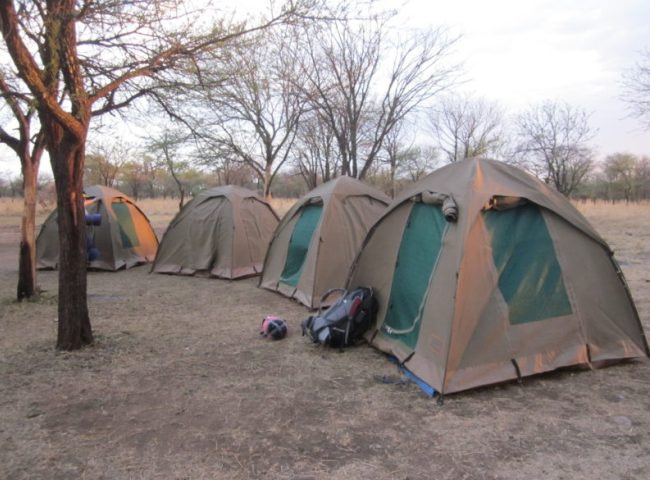 Things to Bring on Camping Safari